This is a guest post by Chris Rogers (@RogersDC), who has spent 15 years in IT, long enough to see science fiction become reality through the innovation of two web booms. Fascinated with the successful development of software and online applications into viable businesses, Chris spends large amounts of "free" time identifying successful examples.

Zensify brought a new application to the iPhone today:  an integrated, (mostly) stable, and relatively light client for social networks and media.  It effectively combines streams from some of the top social applications in several categories and adds an addictive twist of its own.

It’s tempting to look at Zensify as just another Twitter client on the iPhone, but you’d be underestimating it. Twitter and the iPhone were made for each other: the iPhone’s screen is just the right size for a single tweet and the iPhone keyboard. This is probably why there are so many good Twitter apps built specifically for the iPhone. As a Twitter client, Zensify covers the expected functions including retweets and favorites. Unfortunately, Zensify’s Twitter support is only average and lacks links to picture sites, URL shorteners, and geo tags.

This app starts to shine when you go beyond Twitter.  After registration, Zensify prompts for Twitter plus seven more social networks, leaders in each of their categories.  Other social networks and services include: Facebook, Flickr, YouTube, Digg, Delicious, Photobucket, and 12seconds.tv.  For social media addicts, these are just the services that need to tracked on the go, with 7 of 8 overlapping my own daily activities. 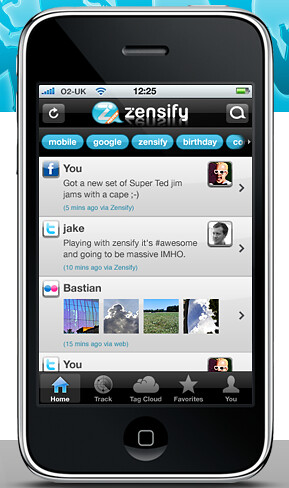 The process to register each social network with Zensify varies, depending on each site’s requirements. Facebook is the most involved, requiring approval for each type of interaction with Zensify.  Digg is probably the least complicated, requiring only that you enter a user name, with no confirmation or password required. Once done, the home page nicely integrates the stream of activity from each of these sites. New Facebook updates, Delicious bookmarks, YouTube videos, and Flickr photos all flow smoothly with Twitter posts, and are just as easy to access.

While browsing all those entries, I did run into a few bugs; Zensify shut down or timed out when trying to access some specific posts.  It’s important to note that the application is labeled as a "Preview," which I assume means alpha or beta level release, so bugs are to be expected.  However, I’m willing to keep using it while the Zensify team works through the kinks, thanks to the very addictive feature that integrates all the networks!

What is the feature that makes Zensify so addicting?  It’s the clouds.  And yes, there are other useful features like persistent searches on the "Track" page and consolidation of "Favorites" from all the networks. But the clouds really sucked me in. The clouds in Zensify are tag clouds based on keywords from entries across social networks. Not just any tag cloud; it is a multi level tag cloud.

Tapping the Tag Cloud button, then tapping an entry in the first cloud presents another cloud of keywords associated with the last tapped keyword, and then another, and then another. Here’s the real benefit: at each level of the cloud, there is an icon at the bottom of the screen that brings up all posts across all social networks that include the selected keywords.  So, if I want to see all the posts about Android, I might tap "Android" in the first cloud, then the "posts" icon, and read the 33 entries in my network related to Google’s cell phone OS.

For me, Zensify does an excellent job of showing the depth in online conversations across my social networks through very effective use of tag clouds.  In spite of a few glitches (and hoping for the addition of Friendfeed), I highly recommend Zensify Preview because of the clouds.

Zensify is not without competition. Yahoo also integrates several social networks in the new Yahoo! Meme, but adds in additional services that I don’t use. However, these services also seem to slow the app down considerably. Nambu, another competitor available for Mac, combines Twitter, La.conica, and Friendfeed into one application, but doesn’t integrate their streams (and crashes frequently).  These applications are all free in the App Store; which one works best for you?