Back in July I was one of the first to break the news about a Twitter redesign that accidentally went live well before its time. FYI: TechCrunch copied and pasted practically my entire post about this. The redesign was available for all of about 3 minutes with only a handful of people able to grab a screenshot or two. Here’s a snapshot of what the redesign was like when it leaked:

Today, the site has went live with this redesign with only minor changes here and there. The tabs are still located on the side and your latest tweet is still located directly beneath the “What are you doing?” box. Followers, followings, and updates are located in the top right corner along with your avatar. The device updates options are now located beneath your friends. The last change is probably due to the fact that not many people are able to use device updates now that Twitter has restricted text messaging usage. 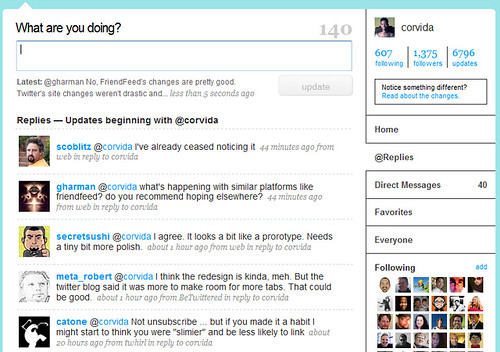 The site redesigns aren’t final as Twitter has noted that there will more changes and features in the feature. Let’s hope those changes come sooner rather than later. I’m happy to see Twitter making some improvements to their site. However, will it be enough to get me off of Twhirl?  Back in February, ReadWriteWeb noted that Twitter’s most popular publishing tool was the Twitter site itself. It’s not enough for an early adopter like myself to switch, but it may give help Twitter’s homepage traffic a nice boost.

I Know Why Black Birders Sing

Instagram Will Soon Show Newer Posts First In Your Feed

Twitter Finally Adds Bookmarks To Save Tweets For Later