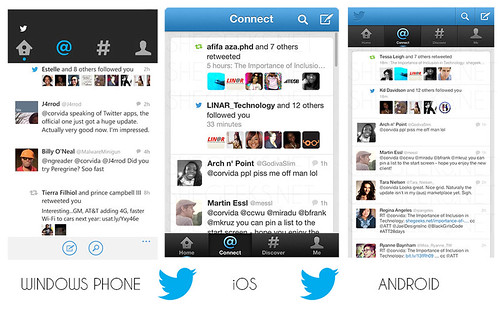 The design of Twitter for Windows Phone is finally on par with Android, iOS, and the mobile web. The latest update won’t cause you to replace popular Twitter apps like Mehdoh or Rowi, but will give the Me and People Hubs for Windows Phone stiff competition.

Anyone that’s not  a Windows Phone user may be wondering – or snickering – about why this is update is news. With Windows Phone, most official apps aren’t nearly as good looking or as functional as they are on iOS and Android. Twitter’s app was no exception until now – sort of.

The interface blends nicely into the Windows Phone environment. Twitter’s infamously thick navigation bar sits at the top of the app for easy access to your Twitter stream (Home), mentions (Connect), trends (Discover) and profile information (Me). Tweets are spaced perfectly part so the interface never seems cluttered.

Media and Twitter cards can only be seen in full tweet view. Conversations are displayed just below the tweet along with the number of retweets and favorites. The RT button offers an edit option and you can also delete your tweets in full view. 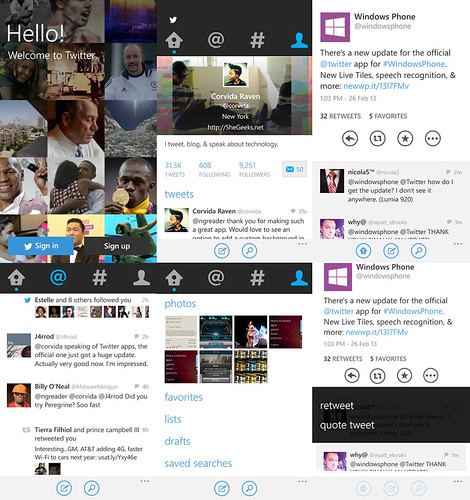 There are no hidden context menus in this app for easy access. Instead, a bar of quick actions sits at the bottom of the app. From here you can go back to your home stream, compose a tweet, or search for something on the fly.

Buried under the “Me” section are your saved searches, favorites, lists, and direct messages. Does anyone else feel that Twitter buries their most useful features in all of their apps?

Thankfully, the update also brings Live Tile support as well as lockscreen integration. You can pin Twitter accounts, lists, and saved searches as live tiles for quick access. Unfortunately, this setup isn’t ideal for using Twitters lists or joining hashtag conversations and quickly accessing replies. Users should have ability to pin a Twitter list or saved search as a column in the app in addition to the live tile option.

Twitter for Windows Phone is relatively the same app with a new look. It certainly doesn’t offer nearly as many features and functionality as Twitter for Android and iOS, which takes some of the fun out of the update.

Mehdoh is still my default Twitter client for Windows Phone. However, I give Twitter props for a great job on the app’s new design and user experience. If the Me and People apps handle most of your social needs, then Twitter for Windows Phone will compliment those apps by giving you access to basic Twitter features that Me and People don’t offer.

If you’re a Twitter power user, the update still won’t meet your needs.