My patience and appetite for Google Reader has been decreasing furiously for months now. Google Reader used to be my “end all be all” for feed reading. I’ve recommended it numerous times to others, but lately Google Reader has become a nightmare. Feedly has come along and showed me a better way to read RSS feeds. But Google Chrome is my default browser, which leaves me stuck with Google Reader most of the time. Today, Google Reader added more fuel to my fire and my disappointment in the service that may cause me to leave it and Google Chrome alone.

Yesterday when I tested Google Reader’s new send-to feature, I was able to access the StumbleUpon page (though I did not stumble anything), but was not able to tweet anything via Google Reader.

I immediately gave up on figuring out the cause because Feedly gets the same job done without the hassle and I didn’t feel like playing tech support with Google.

Today I tried to stumble a great article on ReadWriteWeb by Marshall Kirkpatrick about Appsfire, a must-have app sharer for the iPhone using Google Reader’s send-to feature. Again I was disappointed. 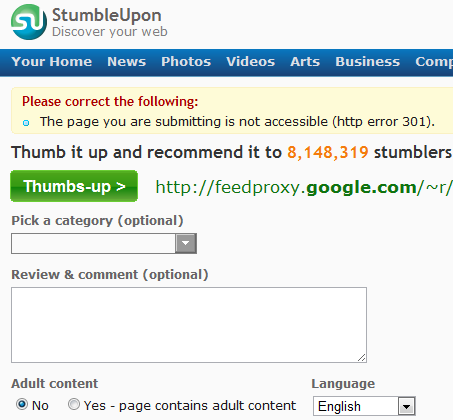 Look closely at the top of the image above and you’ll see a 301 error message. This was the result of trying to stumble an article via Google Reader. I was able to duplicate this error with no problem several times. It seems Google is adding in their address to the actual article when stumbling it. But StumbleUpon won’t stumble it. Tsk tsk Google. I’m not alone either.

I only have one question: did anyone from the Google Reader team test this feature before releasing it? It sure as hell doesn’t seem like it.

Note: If this is a browser problem (meaning no one is having this problem in Firefox, Opera, or Safari and I’m using Google Chrome), then I will completely drop my support for Google Chrome and put up with the mess of a browser that Firefox has made so I can go back consistenly to my rainbows and unicorns in Feedly. If Google can’t support make their own browser, I don’t see why I should continue to either.

Beauty: In The Eye of the Beholder or Algorithms?