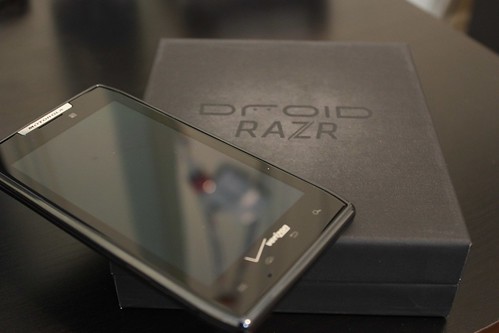 The Motorola RAZR was a mobile icon during my early teen years. Just about everyone I knew had one. It was surprisingly thin for a phone! The screen was impressive and it could do one thing very well that all of my friends love: transfer ringtones via bluetooth.

Fast forward to today and the Motorola RAZR doesn’t compare to my iPhone 4. So, I was skeptical and intrigued when Motorola announced a successor; the Motorola Droid RAZR. With the help of Verizon’s 4G LTE network, could the Droid RAZR recapture the swagger and appeal of the original RAZR?

Though the Motorola Droid RAZR is incredibly thin, it’s far from small with a 4.3-inch Super AMOLED and scratch-resistant gorilla glass display. Adding to its strengths is a KEVLAR strong backplate that covers the back. It looks good in pictures, but my iPhone 4’s 3.5-inch display looks like a dwarf next to the Droid RAZR.

Is a bigger display worth comprising the size and look? Not in this case. Colors are vivid on the RAZR’s display, but pictures with low lighting appear over-saturated onscreen. On the other hand, watching videos is an entertaining experience and I found myself watching tons of them on the native YouTube app. 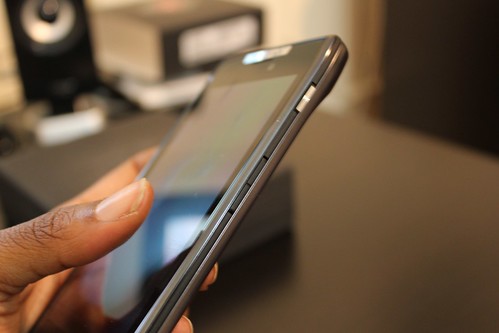 The larger display puts the Droid RAZR in a two-handed smartphone box; one hand to hold it, one hand to operate it. Those with larger hands might like holding the Razr, but getting my thumb to the navigation buttons at the bottom of the smartphone required more stretching than I cared to do for a phone.

The Droid RAZR is a snappy smartphone, thanks to Android 2.3 (Gingerbread), a dual core 1.2 GHz processor and 1GB of RAM. Verizon’s 4G LTE service in NYC kept things just as speedy when browsing the web. In fact, Verizon’s LTE service beat my WiFi connection in download speeds by 2-5Mbps on several occasions according to Speedtest.net app results.

As I previously mentioned, I’m a big fan of watching videos on this smartphone and found myself using the native YouTube app a lot. It’s slightly different from my iPhone experience. To differentiate itself from the iPhone’s native app, the YouTube app for Android plays a small thumbnail of a video in portrait mode and goes full screen when positioning the phone in landscape mode. A small change in design, but I absolutely love it! The Droid RAZR packs a powerful speaker on the back that makes music and videos sound refreshing to the ears. 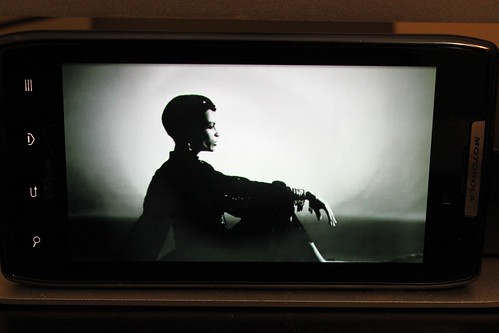 There are two deal-breakers for me when it comes to the Droid RAZR. First, it comes with a ton of crap-ware that you can’t get rid of. I was surprised to discover that Netflix (and other apps) can’t be removed from this smartphone. This is becoming a common theme with a lot of Google/Android products and a definite downside for users.

Apps to Get Started With

Aside from your typical social networking apps, there were a few good apps to get started with using the Droid RAZR. The first thing I downloaded was Advanced Task Killer. It’s the perfect app for shutting down apps that like to run in the background.  Next, I needed a news app. While Zite, is my news app of choice on my iPhone, it’s not  available for Android. Fortunately my favorite news reader, Feedly, is available and for free. I paired Feedly with Pulse news to keep up with my favorite reads and discover new content throughout the day.

Next, I needed a to-do list app. Any.do was my choice because of its beautiful design and free price tag.  UberMusic is a beautiful music player for Android! Coupled with Pandora and DatPiff, I was able to stay updated on my favorite music flowing through the amazing speakers on the Droid RAZR.

While it doesn’t quite capture the air of the original RAZR, the Droid RAZR brings the RAZR legacy up-to-date. For $299.99 with a 2-year contract on Verizon Wireless, it’s one of the few phones on the market that can boast of having a gorilla glass display. It also hosts an HDMI micro port and 16GBs of internal memory. It’s even upgradeable to Android 4.0 (ice cream sandwich), though there’s no word on when that will be available for the device.

Coupled with Verizon’s 4G LTE network, the Motorola Droid RAZR is a powerful phone, but it can’t keep up with the excitement because of a crappy battery life. In the future, I hope the upcoming Droid RAZR MAXX will pick up where the DROID RAZR fails.