Seesmic is wiggling itself out of a tight spot to become the number one Twitter client for everyone, not just early adopters. Not only does Seesmic have to compete with Tweetdeck’s desktop domination of 12.58% share of users (3.76% of folks on Twitter use Seesmic), but also against Tweetie’s 8.29% mobile domination. It’s an uphill battle that Seesmic’s new client, Seesmic Look, is already handling very well. 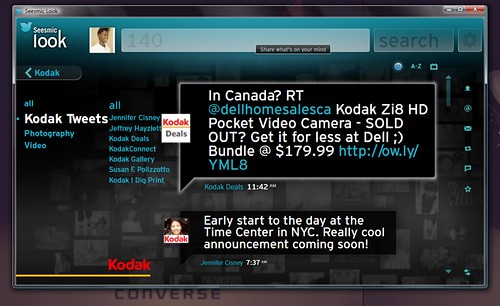 Aimed at mainstream Twitter users concerned with what’s trending, Seesmic Look gives you a TV Guide look with a tablet feel for diving into Twitter. With nice large fonts, and an emphasis on search and filtering, Seesmic Look is delicious eye candy of real-time information. You can sort tweets by time and name or play them in slideshow presentation style. All of Twitters new features including:

New tweets indicators are sprinkled in just the right places. Spelling checking is a feature, but you can’t add new words. “Seesmic” doesn’t register as a correct word (suggests “seismic”). On a brighter side Seesmic Look does come with two themes: Dark and Light. This is obviously nothing compared to TweetDeck’s customization options.

Who Should Use Seesmic Look

According to Twitstat, Seesmic Look is already ranked as the 46th most popular Twitter client gaining just 0.19% share less than 5 hours after launching. But who are these users? Seesmic Look is aiming for mainstream and TechCrunch says Seesmic Look is for the Oprah Crowd. Yet, after a quick Twitter search for “Seesmic Look” I’m inclined to disagree about who’ll actually use it.

There seem to be more techies promoting the service for starters. Though Seesmic founder Loic LeMeur let Robert Scoble know in advance that power users might hate Look, I feel there are some benefits for power users in Look’s layout and filters. For example, over the next week I’ll be using Seesmic Look for monitoring my private Twitter lists. I find Twitter’s UI cumbersome for not only keeping up with my lists, but managing them.

Reading my lists in Seesmic Look is easier on my eyes. The design of Look is better suited for me to digest the information from my lists quickly. Look also puts important list management actions right at my finger tips. I have to do a bit of scrolling and too much clicking on Twitter’s site.

Check out Scoble’s post which includes reasons why Seesmic Look doesn’t add up. For those that have tried Seesmic Look, please share your thoughts on the following: