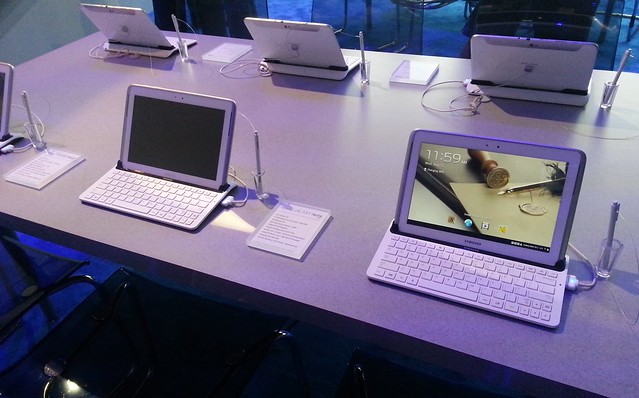 This week Samsung announced the Galaxy Note 10.1, a tablet spinoff of their popular 5.3-inch Galaxy Note smartphone with an emphasis on content creation as well as consumption. Aimed at making art as much as you can consume it and truly doing two things at the same time, the Galaxy Note 10.1 brings back the power of the stylus to help get the job done. Can you have your content and create it too? Time will tell as the Samsung Galaxy Note 10.1 attempts to raise the bar for tablets to come.

My initial testing was only for a few hours, but the performance was consistently smooth though not the fastest. The 1280×800 resolution on the display leaves much to be desired. Graphics look soft, almost blurry, and HD videos aren’t as clear as on other Android tablets. On the bright side, the Galaxy Note 10.1 runs Android’s Ice Cream Sandwich build with plans to roll out Jelly Bean in the near future along with a 3G version of the tablet. It’s loaded with 2GBs of RAM and comes in the standard 16GB or 32GB harddrive options, but is expandable to 64GBs using the MicroSD slot. When I showed friends pictures of the Galaxy Note 10.1, they immediately noted how much it resembles the iPad its glossy finish, slim frame, and thick bezel around the display. Despite the smooth finish, the plastic frame of the device leaves a lot to be desired. It’s hard to make a device this big and cover it in plastic without making it feel cheap. Despite the cheap feel, I have to give to Samsung for at least making it feel sturdy and light. At 1.31 lbs, it’s lighter than the iPad (1.44 lbs). Holding it with one hand isn’t a workout on your arms and wrists. 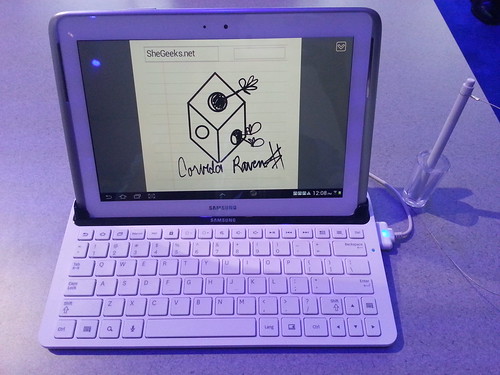 The stylus has been out of style since I was born and it’s easy to want to dismiss Samsung for trying to bring them back, but there’s hope for the stylus where the Galaxy Note 10.1 is concerned. Samsung won’t call it a stylus though. It’s called an S-Pen, though it looks more like a marker. Instead of being battery operated, it draws all of its power directly from the screen. With over 1000 levels of pressure sensitivity, the S-Pen can write as light as a pencil or as dark and thick as a permanent marker at your command. This is great in theory, but I had a hard time getting a feelfor the pressure I was creating on the screen. Some letters appeared thicker than others while writing. A better option would’ve been the ability to write at a specified pressure. The S-Pen and Galaxy Note 10.1 don’t feel close to writing on paper with a pen or pencil. However, Samsung continues to push the boundaries of writing on digital screens better than competitors with features like shape, formula, and text matching that help smooth and fine-tune your handwriting. Don’t worry about your wrist getting in the way. The screen on the Galaxy Note 10.1 is smart enough to ignore your hand while taking notes.

There’s a strong push around multitasking on the Galaxy Note 10.1 with the “multiscreen” feature. The multiscreen feature is really just a thick divider down the middle of the screen that allows you to see two apps at the same time. Unfortunately, this is limited to less than 10 apps with no word on whether others will be able to take advantage of it in the months to come. 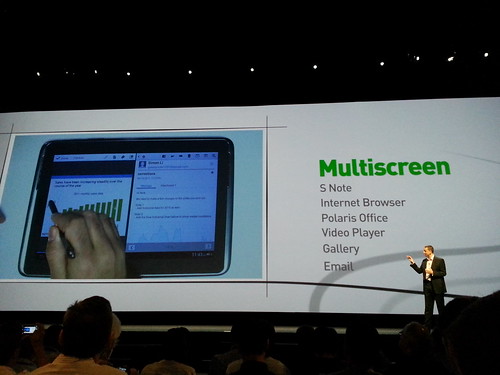 Drag and drop support? Not quite. You’re actually have to copy, crop, and paste anything you’re trying to transfer to one of the multiscreen apps. Samsung needs to take a long look at Windows 8 if they really want to talk about truemultitasking because that’s the standard they’ll need to match and Microsoft goes well beyond providing a mere screen divider for a handful of apps.

Did Samsung accomplish their mission to “innovate the market and do something completely different?” No. Does the Samsung Galaxy Note 10.1 change the game? No, but it does raise the bar when it comes to handwriting recognition. Is it life changing and does it make your life more creative or productive in new ways? It doesn’t for me personally, but students, business meeting addicts, writers, and artists can find some benefits in this tablet. Still, there are a few other competitors I’d consider before choosing the Galaxy Note 10.1 like the Asus Transformer Pad Infinity TF700, the iPad, and if you can hold you breath long enough, the Microsoft Surface. The pricing of the Galaxy Note 10.1  ($499 16gb, $549 32GB) is a little steep considering its specs feel more on par with the Nexus 7 with the exception of the S-Pen and expandable memory. 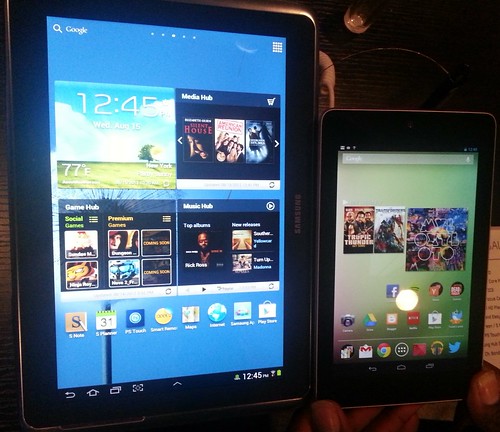 Though content creation is possible on the Samsung Galaxy Note 10.1, it falls short when put next to competitors like the Asus Transformer Pad Infinity and doesn’t hold a candle to good old fashion pen and paper.