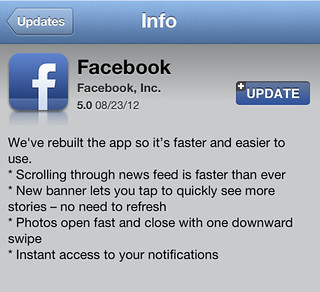 Ask anyone about using the Facebook app on any device and you’ll hear more complaints and frustrations than a therapist. Whether you’re using Android, iOS, or Windows Phone, Facebook’s mobile experience absolutely sucks in comparison to their desktop site. It’s slow to load, frequently displays error messages, doesn’t always post status updates, and is missing a host of features from the desktop site.

Still, the latest update to Facebook’s iOS app (Facebook 5.0) brings a number of speed improvements to quell some user frustrations.

Loading the Facebook app is noticeably faster with the 5.0 update, especially over 3G. Though it still takes more than 10 seconds to load updates, and add 7-10 extra seconds for avatars and photos to appear, you certainly won’t be waiting 5 and 10 minutes like you used to.

Facebook has changed the icons for status, photos, and check-in updates to an odd translucent blue. I preferred the colored icons from before, but it’s not a drastic difference. Scrolling down the Newsfeed, a new bar appears under the status update options that continuously keeps you up to speed on the number of new updates in your Newsfeed. Tapping the bar takes you right to the top of the Newsfeed with the new items completely loaded. This means less waiting time and refreshing to see new items, but it makes me wonder what effect this feature has on battery life. 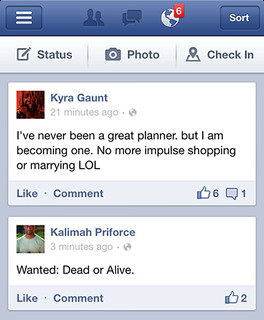 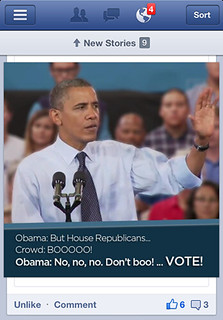 Facebook keeps the pull to refresh option, but it no longer displays the date and time of your last refresh. Additionally, the new Facebook app update features larger “Like” and comment icons in the Newsfeed. You don’t see these bigger icons in profiles, but I’m sure we will in the near future.

Previously it would take well over a minute for a profile page to completely load, which led to a lot of error messages and timeouts. Loading Facebook profiles is exceptionally faster with the lastest update. If you’re familiar with pulling your hair out when the screen freezes or stutters while scrolling through Facebook, you can breath a huge sigh of relief after you update. The scrolling experience has been drastically improved and feels much smoother and more seamless than ever before.

On the visual side, not much has changed in the profiles section. Previously there was a little camera icon in the lower right corner that allowed you to change your cover photo. Now it’s gone. This is as far as the changes go.

Quite frankly, the most noticeable speed improvement to the Facebook iOS app involves images! In the past, a photo could take more than 5 minutes to show up in the Facebook app. That’s not an exaggeration. I’ve experienced many connection timeouts when loading or uploading photos in Facebook.

Thankfully with the latest update, photos appear noticeably faster in fullscreen view with a simple slide out effect that occurs when you tap the photo. The black bar that used to hog the bottom of the app is now replaced with three icons (like, comment, and tag) and the usual info about the number of likes and comments on a translucent and gradient background. When tapping on the comments/likes text, a little white box pops up with the comments, number of likes, and option to write your own comment. These changes make it easier to see the full picture in addition how people are interacting with it. 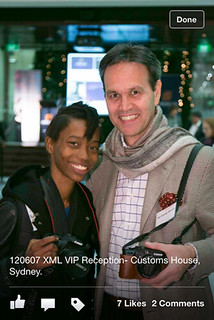 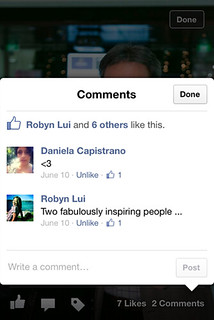 Long pressing on a photo gives you the option to save a photo, and make it your profile picture if it’s you’re own photo. When you’re finished, you can swipe down to close the photo or hit the translucent “done” button in the top right corner of the photo.

If you’ve been frustrated with Facebook iOS app for a very long time, take a look at the latest update. Plenty is still missing from the iOS app such as the ability to tag or reply using usernames, share statuses, or edit updates and comments. Visually there won’t be much to talk about, but the improved performance and speeds are enough to make the internet go crazy.

This update to the Facebook iOS app is faster, better, and smoother than any of their previous efforts! Hopefully other platforms will enjoy the better performance soon too.