In addition to the facelift, Google Reader is now sports a shiny new Google+ button. But this new button comes with a high price for longtime Google Reader users. While the new design may take some getting used to, integration with Google+ is something that many cried for since the launch of Google+. Did Google get it right or should you prepare to find another RSS reader?

They call the new look “cleaner and nicer”, but really it’s just the new Google look that’s been popping up all over the place. Google Reader feels less cluttered with the new design, but it’s not perfect. More space was dedicated to seeing content in the previous design.  Now, the search bar and subscribe options take up space that I wish was occupied by content.

When the new look arrives, Google offers the option to export your Activity Stream (likes, shared items, starred items, etc.). The reason they’re offering this option from the beginning is because Google retired a lot of features within Google Reader today.

Most of Google Reader’s social features have been replaced with the Google+ share button. The +1 button is the gateway to your new shared links list and commenting means posting to your Google+ profile. You can still access the “send to” feature to share with your other social networks and starred items for those articles you think you’ll come back to. 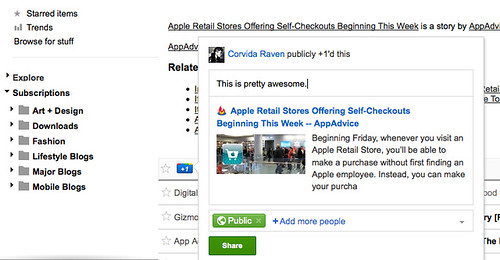 Even with the option to export your data, longtime users in left in the dark. Data portability means nothing if you can’t take that data somewhere else and USE it.

What The Update Is Really About.

Don’t mistake this as an attempt at making Google Reader more social. This is not about Google Reader at all. In fact, it’s all about sending traffic and activity to Google+. Google Reader has a very active and loyal base of users, but they’re more interested in converting them into Google+ users.

I’m happy about the integration with Google+, but it’s very limited. At the moment, Google Reader is without a social component. Adding a share button to a website doesn’t make it social. I’d like to see a social component reintroduced into Google Reader in the future. Also, it would’ve been appreciative of Google to transfer previously shared items from Google Reader to Google+ accounts. This could’ve easily served as an incentive to get Google Readers more excited about the integration with Google+ and served as a reward for users who have paved the way for a product like Google+ to exist.

It’s hard to call this a disappointment, but if you were looking for something spectacular from this new Google Reader update, you will be disappointed. If you use Google+ a lot and you use Google Reader, you’ll appreciate the integration. I’ll be sticking with Feedly as my default RSS reader. If you don’t use either product, then this post is completely irrelevant to you.

What do you think of the new Google Reader look? Are you happy about the integration with Google+? Are you upset about the features that were removed? Share your thoughts in the comments!