Gmail for iOS [iTunes Link] wasn’t worth switching to when I first reviewed it. It was the web app horribly disguised as a native app. Over time, Google has made some improvements and the latest update brings a much needed refresh to Gmail’s iOS app.

Is it better than Mail? Does it match the use and functionality of Sparrow, a former competitor now owned by Google? Keep reading to find out! 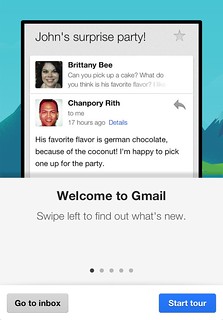 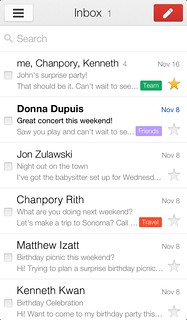 Gmail for iOS received quite the design refresh in the latest update. The interface looks a lot nicer and cleaner than the web app. In fact, it’s more in-line with the design Google deployed across many of its services, especially Gmail for desktop, Google+ and Google Now.

Once you sign-in to your Gmail account, you’re immediately greeted with the typical inbox view, but it looks more like desktop version of Gmail now. At the top of your inbox is a search bar followed by your latest emails. Pull down to refresh your inbox and swipe up to see more emails.

Tapping the checkbox next to any email will bring up more options to quickly delete, label, move or mute conversations. The only thing that’s hard to notice from this view is the number of messages in a thread. It’s listed rather awkwardly and subtly next to the names of the sender/receiver.

Swiping to the right or hitting the list icon in the top left corner will bring up labels and access to other Gmail accounts. That’s right – Google finally added support for multiple accounts! To add or access multiple accounts tap the name of the current account. A list of added accounts along with the option to add another will come up immediately. Tap the account you want to see and Google will pull it up almost instantly. 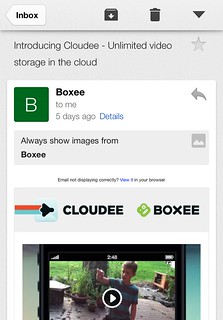 Emails look a lot better with the latest update.

Archive, trash icons and more actions can still be found at the top of any email. The option to hide or show images now blends into emails, replacing the previously distracting highlighted streak. Avatars for contacts are prominently displayed and if no avatar is assigned Google adds an icon of the first letter of their name.

Oddly – and unfortunately – you can’t copy the sender or receiver’s email address from this view. Not very helpful, Google!

Emails look a lot like the “cards” from Google Now.  This is really noticeable in threaded view when tapping on messages to open and close them. Forewarning for those that deal with a lot of threaded emails: a one-tap option to close all messages, like the official Gmail site, does not exist in this app.

Pinch-to-zoom has been added in this update, a notable feature that Gmail for Android recently received. Unfortunately, it’s not as smooth on iOS as it is on Android. Zooming in usually causes the entire email disappear before reappearing seconds later. Animations are jittery when moving emails around and it’s almost impossible to scroll diagonally. At the very bottom of emails you’ll find big pretty buttons for replying and forwarding.

Composing an email is still quick and easy with a simple tap on the pencil icon located in inbox view. You can’t open a new email by tapping the email address of someone from another email. 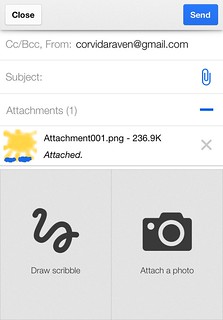 You can access Gmail aliases from the “Cc/Bcc, From” box and  saved Gmail or phone contacts from the “To:” box. Attachments are still limited to photos, but you can now scribble a drawing on the fly and add it to your email. You won’t be doing any Picasso worthy drawings with this feature, but it’s a nice option to have.

Conclusion: It’s Worth the Upgrade

If Gmail is the sole provider of your email needs, then you’re going to enjoy Gmail 2.0. In addition to multiple accounts, you can also RSVP to Google Calendar invites, +1 and comment on Google+ posts from the app. Coupled with the new look, Gmail is officially comparable to the native Mail app for iOS.

Personally, I’m sticking with Mail because I have other accounts that I’d like to keep separate from Google’s prying algorithms.

Interestingly enough, despite recently acquiring the amazing team behind Sparrow – arguably the best email client for Mac and iOS – Google does little to bring Gmail up to par with their former competitor. If you paid for Sparrow, keep it and wait for the next round of updates from Google. You’re not missing anything.