It’s been a while since I’ve mentioned  Firefox on SheGeeks. I stopped using Firefox in 2009 because of poor performance and memory leaks. Firefox 3.4 is the last version I used before switching to Google Chrome. I haven’t looked back.

Now Firefox 4 is officially out and it’s a major revamp for the Firefox browser. In fact, Firefox 4 managed t hit 15.85 million downloads within 48 hours of it’s official release! I enjoyed playing with the Firefox 4 betas, but I wasn’t sure if it would be able to knock Chrome off of it’s throne. Here’s what I have to say after a week of using Firefox 4 as my default browser.

It’s been a while since I’ve used Firefox. in 2009, I posted about how I felt Firefox fell off the bandwagon due to slow performance and memory leaks. Firefox 4 is supposed to have a web experience up to 6xs faster than previous versions of Firefox. I definitely agree that it’s superior to previous versions of the browser.

Firefox 4 almost feels as light as Google Chrome on my iMac. I’ve been using it for the past week crash free. I haven’t experienced significant slow downs over time like with previous versions either. Features that I loved coming back to in Firefox 4 are the Awesome Bar and Personas. The Awesome Bar can be used to switch between tabs and moved between tab groups (more on Tab Groups below). Previously, I felt Personas looked out of place in Firefox. Now, Personas compliments Firefox 4 very nicely.

Firefox 4 isn’t radically different from previous versions in terms of design. The reload and stop buttons have also been combined in an effort to save space. The biggest change comes to the Tabs, which are now above the awesome bar in Firefox. Firefox 4’s tabs also appear to be wider than tabs in Google Chrome. The amount of space each tab takes up in Firefox can be frustrating for users that are tab junkies. If you don’t like the your tabs on top, you can always revert back to the default tab design.

Firefox 4 extends the functionality of tabs with App Tab. It’s an easy way to “dock” or pin a tab.  To make an App Tab, simply right-click on a tab and select “Pin as App Tab”. App Tabs are placed at the beginning of the tab row and only display’s the favicon of the site. They save tab space and keep your most visited sites within reach at all times.

Dealing with a row of 20+ tabs can be overwhelming. Firefox 4 has a feature called Panorama to combat this. Panorama lets users group tabs together. To get started, select the tab groups icon or right-click any tab to ‘Move to Group’.

Each group displays thumbnails of open tabs, can be resized, and given a name. Users can drag and drop tabs into existing groups, start a new tab group, close tabs, or open a new tab. Ideally, one could have social networks running in one tab group and work sites running in another. Panorama is hands down one of the most useful features of Firefox 4 for power users! 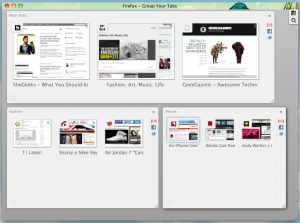 Firefox Sync is a native feature of Firefox 4. With Firefox Sync users can acces the following Firefox settings and content across multiple devices:

Available via computers and mobile phones running Firefox, all user data is stored securely in the cloud according to Firefox. For security purposes, all data synced is encrypted before it hits the cloud. If you use Firefox on multiple devices you probably want to take a look at Sync.

Firefox 4 brings a new Add-ons manager that feels a lot like the Google Chrome Web Store.  From here, users can manage Firefox extensions, themes, and plugins.When opening Add-ons Manager, a notification informs users that of available plugins that do not require a restart after installing. This doesn’t apply to all plugins (Shareaholic), but a good amount of them seem to have adopted this new feature. Google Chrome users won’t be impressed, as the Chrome’s plugins and extensions do not require a restart of Chrome.

The Add-ons manager lets you search for specific Firefox add-ons, but there is no way of viewing all add-ons from this tab. The Firefox Extensions page is still the designated place for Firefox extensions, themes, and plugins. 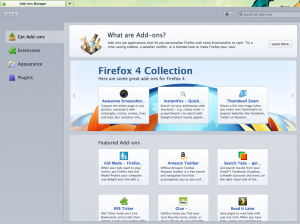 Do not track (DNT) is a feature that tells advertisers on websites you visit that you do not want to be tracked. A 1 or 0 is sent to the website in a header as a notification. What’s interesting is that checking this feature does not opt you out of tracking. In order for this feature to work, advertisers will need to acknowledge the number sent in the header. In essence, advertisers have to opt-in to DNT in order for Firefox users to opt-out of tracking.

Furthermore, Google and Microsoft have competing DNT features that they would like adopted by advertisers. Here’s a list of publishers and advertisers that have adopted DNT Web technologies that “respect consumers’ wishes not to be tracked across their Web properties and services” according to Mozilla.

Firefox 4, Worth A Look

All in all, Firefox 4 is worth the upgrade if you haven’t done so already. If you have previously switched from Firefox to Chrome, now’s a good time to give it another go. I’m in love with Panorama, Firefox’s group tab feature. Google Chrome still feels more simplistic in design and user experience. Chrome also has deeper  integrations with my iMac like accessing the Dictionary  and Twitter for Mac apps. Sorry Firefox, but it’s a little too late for this power user .