RSSmeme developer Benjamin Golub is continuing to surprise us. Last Saturday, Ben gave us Tweet-2-Tweet, a Twitter app that allows you to see the conversation between two Twitter users that reminded me a lot of Facebook’s wall-to-wall feature. This week, Ben has given FriendFeed users something really special and long overdue: FF To Go. (Please try http://test.fftogo.com for the time being)

While MojiPage has taken a stab at creating a mobile FriendFeed app, FF To Go is the best mobile app of FriendFeed available. While the service is running into some hiccups, I tested FF To Go on my Motorola Q9m running Windows Mobile 6.0 Standard with a test link that Ben noted that I use until noted otherwise. As with all FriendFeed apps, you need your FriendFeed remote key. This is not your password. 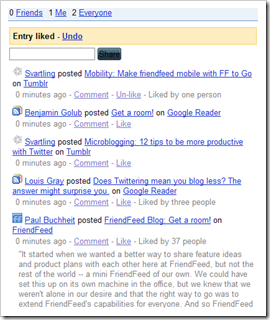 As you can see, FF to go is almost a replica of FriendFeed. The UI is very much the same with minor elements taken out such as name and the "more" feature in FriendFeed. You have a "Friends" link, a "Me" link, and an "Everyone" link, which is exactly how it is on FriendFeed. Each link has it’s own keyboard shortcut for added convenience. What I did enjoy was that my "hide" settings that I’d already set in FriendFeed were ported over to FF to go, so that I didn’t see any Twitter entries. In fact, I saw the same note that I see on FriendFeed when something is hidden.

Liking and commenting on a item was quick and easy. The comment box is great for mobile phones and each update that I sent was immediately refreshed to display the updated item at the top of the screen.

FF to go’s integration with FriendFeed is nice and effective. The UI gets plenty of brownie points for being consistent with FriendFeed’s UI. The only thing I’d ask for is the ability to see the services that users are utilizing when I visit their FriendFeed page. Otherwise, it’s honestly a fantastic version FriendFeed formatted for your mobile device without losing out on the great features that FriendFeed offers. More coverage in "Take FriendFeed Mobile With FF To Go" and "Mobile FriendFeed – there has to be a better way".