It’s the only tablet that didn’t come with a native email client. I’m talking about the BlackBerry PlayBook. It’s the latest entry into the tablet market, currently dominated by Apple’s iPad. It launched without an email client, a real calendar app, and social networking apps like Twitter and Facebook. In the past month, the only updates have been a Facebook app and Video Chat for PlayBooks. Did RIM kill their tablet before it even hit the market?

Disclosure: A BlackBerry PlayBook has been provided by RIM for the purpose of this review. 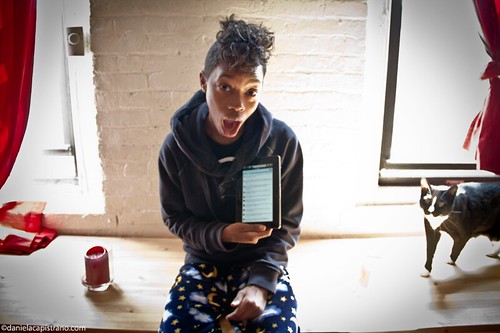 Over 45,000 people purchased or pre-ordered a BlackBerry PlayBook on the first day, beating sales for Android tablets like the Motorola Xoom and Samsung Galaxy Tab . With a 7-inch multi-touch display, the PlayBook is smaller and lighter than the iPad 2’s 9.7-inch display. Its design and the brand name behind it come with a high level of attraction. But do big things really come in small(er) packages?

The BlackBerry PlayBook is beautiful, sleek, and feels as light as an iPhone 4. It has a bright 7-inch display is surrounded by an interactive black bezel. HD videos and Facebook photos look amazing on the PlayBook. The very edges of the display are home to two recessed speakers that sound clear and vibrant when playing music. In the top center of the display is a 3MP 1080p HD forward-facing camera for video chats.

The back of the PlayBook has a rubber coated feel that is smooth without being slippery.  It’s also less finger-print prone than the front screen, unlike the 7-inch  Samsung Galaxy Tab. A 5MP 1080 HD rear-facing camera sits in the top center of the back. Volume keys, an audio jack, and a recessed power button sit along one side of the device. Micro-USB and Micro HDMI ports align the opposite side.

With a 1 GHz dual-core processor, 1GB RAM, and a 16GB harddrive, I can’t understand why the PlayBook takes 1 minute and 10 seconds to start. Shutting down the PlayBook is only a hair faster and restarting the device is something you’ll think twice about doing if you’re in a rush. I tend to leave my PlayBook running to avoid the tedious start up times. Fortunately, this sluggish performance doesn’t last forever.

You’ll need a wifi connection for setup and a BlackBerry ID before you can start using the device. Once the PlayBook was up & running, it’s absolutely fast and a beauty to play with thanks to the QNX powered OS. Where iOS and Android have several homescreens, or pages for app shortcuts, the PlayBook just has preset tabbed menus for all apps, favorites, media, and games. You can’t customize the names of these tabs, but you can add and remove apps to them. The PlayBook’s background is customizable and you can rearrange apps, but that’s as far as customization goes on this tablet. 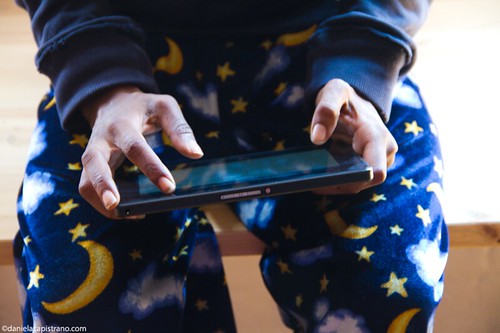 It supports POSIX OS, SMP, Open GL, BlackBerry® 6, WebKit, Adobe Flash, Java® and Adobe Mobile AIR. Not many relevant apps are in the BlackBerry App World that take advantage of these capabilities. Some apps that are worth a try are:

The PlayBook may have an App World, but you’ll spend most of your time in the browser due to the lack of relevant apps. The browsing experience is top class. I was genuinely impressed to see media heavy sites like World Star Hip Hop, NYT, and CNN to show flawlessly even while pinching to zoom in and out. The Flash experience is wonderful when viewing YouTube and TED (client), but  the fun stops there without Netflix and Hulu. Copy and paste is another feature I was happy to see. It comes in handy when replying to emails or editing documents. Unfortunately, the Playbook’s browser is plagued with crashes after opening 4 or more tabs. 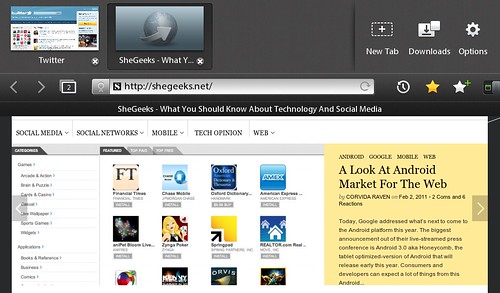 The downside to this incredibly browser is that  it doesn’t guarantee long periods of engagement on a mobile device like a tablet. This immersion in the browser is a burden on a wifi only tablet like the PlayBook. In Atlanta, I could barely use the PlayBook on the go. In New York, I faired a lot better by sticking to offices and coffee shops. It just doesn’t do what we all know native apps can do like give notifications for new emails.

Navigating The PlayBook With Gestures

Gestures are frequently used to navigate the PlayBook and apps. Swiping up from the very bottom of the screen will zoom out of any app and activate multitasking (more on this below) Swiping down from the very top will show you menu options in apps. Unfortunately,  there’s no indication when an option menu is available in an app, which becomes an annoying guessing game after a while. Swiping left or right across the screen will quickly switch between apps. When the PlayBook is in standby mode (screen off), swiping from one end to the other will turn the screen back on. This eliminates the need to tinker with the frustratingly recessed power button. Simply swipe!

Raising The Standards With Multitasking 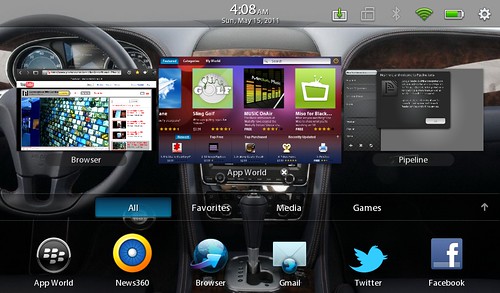 Multitasking runs flawlessly on the PlayBook and it is the best I’ve seen on any device.  To activate multitasking on the PlayBook, simply swipe up with your finger from the very bottom of the screen. You’ll see a panel of all running apps with the app menu just below. You can close apps running in the background by tapping the ‘x’ icon just below the app thumbnail or by swiping up on an app. This is a great view for switching between numerous apps and opening a new app.

The BlackBerry PlayBook is currently wifi only and that doesn’t include support for ad-hoc networks. That means no tethering from your iPhone or another computer to connect your PlayBook to the internet. Wifi sharing capabilities on the PlayBook work flawlessly on PC’s, though Macs may take a little more work. I managed to transfer 5 videos to the PlayBook in under 5 minutes and pull in over 10 images from the PlayBook in the same time. I loved eliminating the need for a usb just to transfer a couple of pics.

Needs More Work For Me To Play

There are a ton of reviews calling the BlackBerry PlayBook half baked. Half baked? Just as much as any other gadget’s initial launch is has been. New gadgets always lack a few things (sometimes major features), when initially released. RIM did a great job on the BlackBerry PlayBook’s OS. I just wish I had more reasons to use it.

This is why my biggest gripe thus far is the lack of apps. The PlayBook launched with 3000 apps. That’s a lot in theory, but not when those apps aren’t relevant to the things people do on the web and mobile devices today. I’ve downloaded (and removed) a dozen or so apps since receiving the PlayBook and it is one of the most frustrating app market experiences I’ve ever had.

Should you get the PlayBook now? No. BlackBerry smartphone owners may be able to get by with the PlayBook, but the lack of sync options for emails, calendars, and contacts will drive you nuts in the long run. BlackBerry has announced many plans to update various things on the PlayBook. So far they’ve delivered a basic Facebook app and a video chat app. If you don’t want to wait around for the PlayBook to get better, keep looking. This may take a while.

Bonus: A little cat named Fellow has decided to help me do extra homework on the PlayBook: Slideshow!