The Android 4.1 Jelly Bean update for AT&T Samsung Galaxy S3 owners is finally available! Sprint and T-Mobile released the update weeks ago, leaving Verizon S3 owners in dead last. But, let’s be real – almost everyone is waiting on an update for their Android device. It’s one of the trade-offs of using Android.

If you were fortunate enough to pick the right carrier, here’s what to expect from Jelly Bean for the Galaxy S3.

Android 4.1 Jelly Bean update isn’t a huge leap from the 4.0 Ice Cream Sandwich update, but that doesn’t mean it isn’t worth the update. Jelly Bean brings significant new features and enhancements to the Android experience.

The biggest new feature is Google Now. If you have no idea what Google Now is watch this video or check out this in-depth piece by Dieter Bohn (The Verge).

Google Now is Google’s experiment with figuring out what you want to know before you even ask. It’s about moving Google beyond being your desktop’s search engine to being your mobile personal assistant. To do this, Google Now takes in contextual information related to your location, inbox, or search history and displays the information most relevant to your current time and place on a “card”. There are cards for transit and traffic, the weather, your next appointment, flights, nearby places, and sports.

Widgets will automatically resize or step aside and make space when adding new widgets to the homescreen. Widget lovers and Android customizers will love this!

There are a handful of enhancements for the Galaxy S3– separate from Android – that come with the Android 4.1 update.

Swype allows you to do just what it says: swipe from letter to letter to create a word. Once you get the hang of “swiping” it quickly becomes a fast and fun way to use the keyboard. Turning on the predictive text option will help shorten how much you swipe as the app learns to predict what you’re about to type.

The S3 camera receives a handful of new features in Jelly Bean. In addition to new filters for pictures and videos, a low light mode is now available. It actually works pretty well, but it won’t turn your Galaxy S3 into a Nokia Lumia 920. Expect bright, but grainy pictures when using this mode (see pic below). 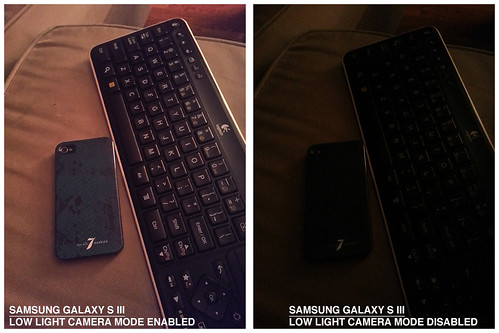 When recording videos, you can now pause a recording and continue at a later time. It’s funny how this is a “new” feature to a smartphone considering the power and capabilities of today’s mobile devices. It works well enough to hope Samsung adds simple transitions or special effects to enhance this option in the near future.

There are two new options under system settings: easy mode and blocking mode. Easy mode is for Android,or smartphone, newbies. It tones down all the widgets that initially show up on the homescreen. It’s not only great for new users, but for vets that want to create their own homescreen customizations as quickly as possible.

Blocking mode lets you disable incoming calls, notifications, and alarms for a period of time. Though it has the option to allow calls from specific contacts, it doesn’t block specific numbers from calling or texting you. That’s what blocking mode should really do!

How To Get Android 4.1 Jelly Bean for AT&T Galaxy S3 Via Kies

If you were expecting an over-the-air (OTA) update, prepare to be disappointed. The Jelly Bean update for the AT&T Galaxy S3 requires Samsung’s Kie’s desktop application – unless you’ve rooted your S3. If you’re rooted, you can install a rooted version of the update via Odin. Just follow the instructions from this XDA thread.

Was it worth the long wait? In some ways, yes. Project Butter and Google Now are must-haves for any Android device that can get it and Samsung does a nice job of enhancing features exclusive to the Galaxy line-up. However, if you’re stuck Android 4.0 you aren’t missing much. There are many ways to tweak Android to run faster or smoother and a lot of Google Now features have started to show up in Google’s Search app.